I’d never done QAYG until now. And now that I have, I can’t imagine why I waited so long!

Quilt As You Go is a process in which you sandwich and quilt each individual block before joining them all edge to edge, the join being covered by a narrow sashing. It produces a neat result and makes the quilting entirely manageable. I’ve been asked to do a beginner’s tutorial, from my own beginner’s point of view, so here it is.

All you need is a bit of attention to detail. There are four things that will make life a lot easier:

The first is achieved by making your blocks a little bit larger than the final size, and trimming out only after you’ve quilted them. The second is important because at some stages you’re sewing through 6 layers, and you need all the help you can get to stop things slipping! The third one ensures that your joins are narrow and all the same size, and will align correctly when you come to join everything up. The fourth helps you achieve the third. I’d go as far as saying that it’s critical. (I’d also say that using frugal amounts of spray baste to join the three layers before quilting has increased speed and decreased frustration by doing away with pin basting altogether. If you can tolerate the stuff, use it.)

Firstly, for each block, sandwich and ‘quilt as desired’. Bear in mind that quilting draws up and shrinks the block, especially if you quilt densely, so make sure you’ve allowed extra all round. Then trim out. You still need your ¼ inch seam allowance all round, but remember that these allowances sit edge to edge rather than being folded under, so they’re part of the total dimension of the block. If you don’t remember this, you’ll end up with a slightly larger than expected quilt. Start joining in the middle of the quilt. I did this because if things were going to slip, I wanted it to happen away from the focal centre. I really needn’t have worried, but it’s a good place to start anyway!

This seam will be trickier to sew, as the previous seam allowance will be slightly in the way. Go slowly and carefully, making sure the 1 inch strip doesn’t pull away from the edge or you’ll have a wavy joining strip. This is where a walking foot is invaluable, because here you’re stitching through 6 layers. Done? That’s the hardest part finished 🙂

Flip the two joined blocks over so they’re face down, and lay flat. If you’ve been careful, you’ll have the two seam allowances lying nice and flat, and butting up to each other. The folded 1¾ inch strip will be on the left, pointing away from the seam.

Fold the flap over the join so that the fold extends just past the right hand seam, and pin across the strip, just to hold it lightly in place. Don’t haul the flap over hard, or the front strip will bulge, just fold it over gently and secure.

Flip the section back over, and pin along the right hand edge of the strip on the front. Remove the pins from the back and stitch in the ditch along the seam line on the front. You should have a sewing line which falls nearly an eighth of an inch from the edge of the fold on the back.

If you find that you’re constantly missing the edge of the strip, you could consider cutting your 1¾ inch strip a ¼ inch wider (ie, 2 inches), but you’ll have more of a ‘flap’ between the stitching and the edge. Alternatively, you can stitch it down by hand, which will also be more invisible, but that’s a lot of hand stitching if you’re impatient or short of time, and if you’re planning to wash the quilt a lot, machine stitching is just a bit stronger.

And that’s it. Join all the rest of the blocks in the same way. Break the quilt down into sections, and join individual sections, rather than making endless long strips the full width or height of the quilt, it’ll be much easier to handle. For a quilt made of blocks the same size, it’s pretty foolproof. You can choose to have sashing that contrasts or co-ordinates, or makes its own pattern, or you can make every sashing strip different, so it forms part of the design. I’d say the process is a bit labour intensive unless your blocks are 10 inches square or more, but you may feel the extra work is worth it given the ease of quilting.

Go on, give it a try. Make 4 blocks and join them, and see if you don’t find it amazingly easy. Makes a nice table runner, too..

28 thoughts on “QAYG for beginners” 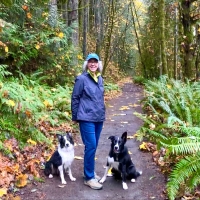 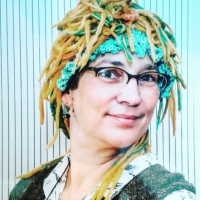